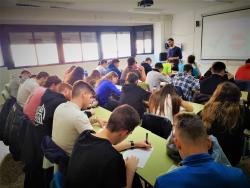 The "ENTRE IGUALES" Project aims to raise awareness and empower the population of the Southern Metropolitan Crown of the Community of Madrid in matters of social and political rights and duties, as well as to train them in matters of tolerance, respect, equal treatment and against all forms of discrimination, in order to avoid these behaviours and to promote social integration and cohesion.

To this end, beneficiaries will be encouraged to participate and act on problems affecting their immediate environment, and innovative methodologies, non-formal education and social mentoring will be used to increase understanding of diversity and improve their social integration.

In order to prevent discriminatory behaviour and to promote integration, insertion and social cohesion, especially among the most vulnerable population of the Southern Metropolitan Crown of the Community of Madrid, Solidarity without Borders will launch different workshops and group activities.

The project "BETWEEN EQUALS - 2020" is aimed at students (between 11 and 30 years of age), the population at risk of exclusion (migrants, ethnic minorities, refugees, political asylum seekers and those of a sexual nature), parents/families of young people, professionals in the field of education and municipal technicians, NGO technicians and social workers.

This project has been carried out since 2018, so we are in the third edition, with very good results.